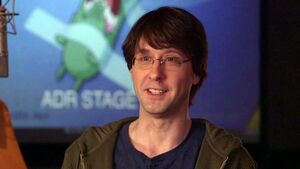 Doug Lawrence, best known as Mr. Lawrence is the voice actor of Sheldon J. Plankton, Johnny Elaine, and other characters. He is also a writer on the show.

Community content is available under CC-BY-SA unless otherwise noted.
Advertisement