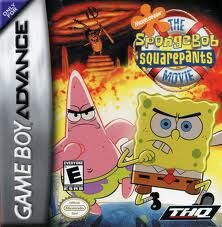 The SpongeBob SquarePants Movie is a 3-D action-adventure platforming game created by Heavy Iron Studios for the Xbox, PlayStation 2, and Gamecube, with separate ports made for the Game Boy Advance and Windows. It is loosely based off of the 2004 movie of the same name.

The plot loosely follows that of the movie, being that Plankton concocted an evil "Plan Z" to take over Bikini Bottom and finally get the Krabby Patty Secret Formula. He steals Neptune's crown and takes it to the dangerous Shell City, framing Mr. Krabs, so King Neptune encases him in a block of ice. Soon Plankton has all of Bikini Bottom as his slaves, so SpongeBob and Patrick must "become men" and venture to Shell City to save Mr. Krabs, thwart Plankton's Plan Z, retrieve Neptune's crown, and save Bikini Bottom.

The gameplay of The Movie Game is very similar to Heavy Iron's acclaimed previous game, Battle for Bikini Bottom, as a lot of assets are re-used. This time around, you play as only SpongeBob and Patrick as you venture through levels based off places from the movie. They collect "manliness points" instead of shiny objects and "goober tokens" instead of golden spatulas. Manliness points, like shiny objects, come in different values and can be used to upgrade their abilities, while goober tokens are used to advance in the game.

There are four level types: SpongeBob, Patrick, Patty Wagon and Slides. SpongeBob and Patrick levels are platforming challenges, the Patty Wagon levels are driving stages, and the Slides involve going down a dangerous slope in a bathtub.

While the PC and GBA versions were not really reviewed at all, the PS2/GC/Xbox versions have received positive to mixed reviews, all three receiving about 70% on GameRankings, and ranging from 73-75 on Metacritic. IGN gave the game a 7.8 saying "Instead of settling on oversimplified gameplay, The SpongeBob SquarePants Movie delivers an entertaining (and challenging) mix of platform and driving sequences. Controls feel responsive and the camera rarely hinders your view of the action." Most reviewers also complimented the fact that it was a licensed game that didn't simply exploit the license in order to sell well, which it could've very easily done considering SpongeBob's popularity.

Despite it's relative obscurity with "hardcore gamers", the console versions of The SpongeBob Movie Game and Battle for Bikini Bottom have developed a decently large cult following, where many say they're underrated and deserve much more attention. Many also have pleasant, nostalgic memories from playing the two games as children.

Community content is available under CC-BY-SA unless otherwise noted.
Advertisement